As the Trump Administration launched it’s unprecedented assault on civil liberties, millions of Americans turned to the ACLU. The organization was flooded with donations and fervent pleas to push back against attacks on immigrants, voting rights, and free speech.

While the ACLU normally works through the courts, this outpouring of support -- coupled with the troubling new threats -- prompted them to try something new. For the first time in its 100-year history, the ACLU launched a grassroots organizing effort -- called People Power -- and ThruText has played a critical role.

The ACLU saw a huge wave of support after the election, and we needed to harness it. ThruText helped us recruit volunteers and get people into the streets.

ACLU’s People Power program kicked off with a “Resistance Town Hall” in Miami, Florida, featuring allies, celebrities, and ACLU leaders. The Town Hall was live-streamed to thousands of watch parties around the country. In order to recruit hosts and attendees to the parties, the organization relied heavily on peer-to-peer texting (P2P) via ThruText.


The ACLU began by recruiting a large group of volunteers to serve as texters, convening them in a Slack for training and rapid communication. Next they sent ThruText text messages (as well as email blasts) inviting ACLU members to host events. Once hosts were established, the ACLU then texted any supporter within 15-20 miles of an event, inviting them to attend. They loaded each event sign-up URL as a custom field in ThruText, along with the event's physical address, and then used those URLs to respond to anyone who expressed interest. 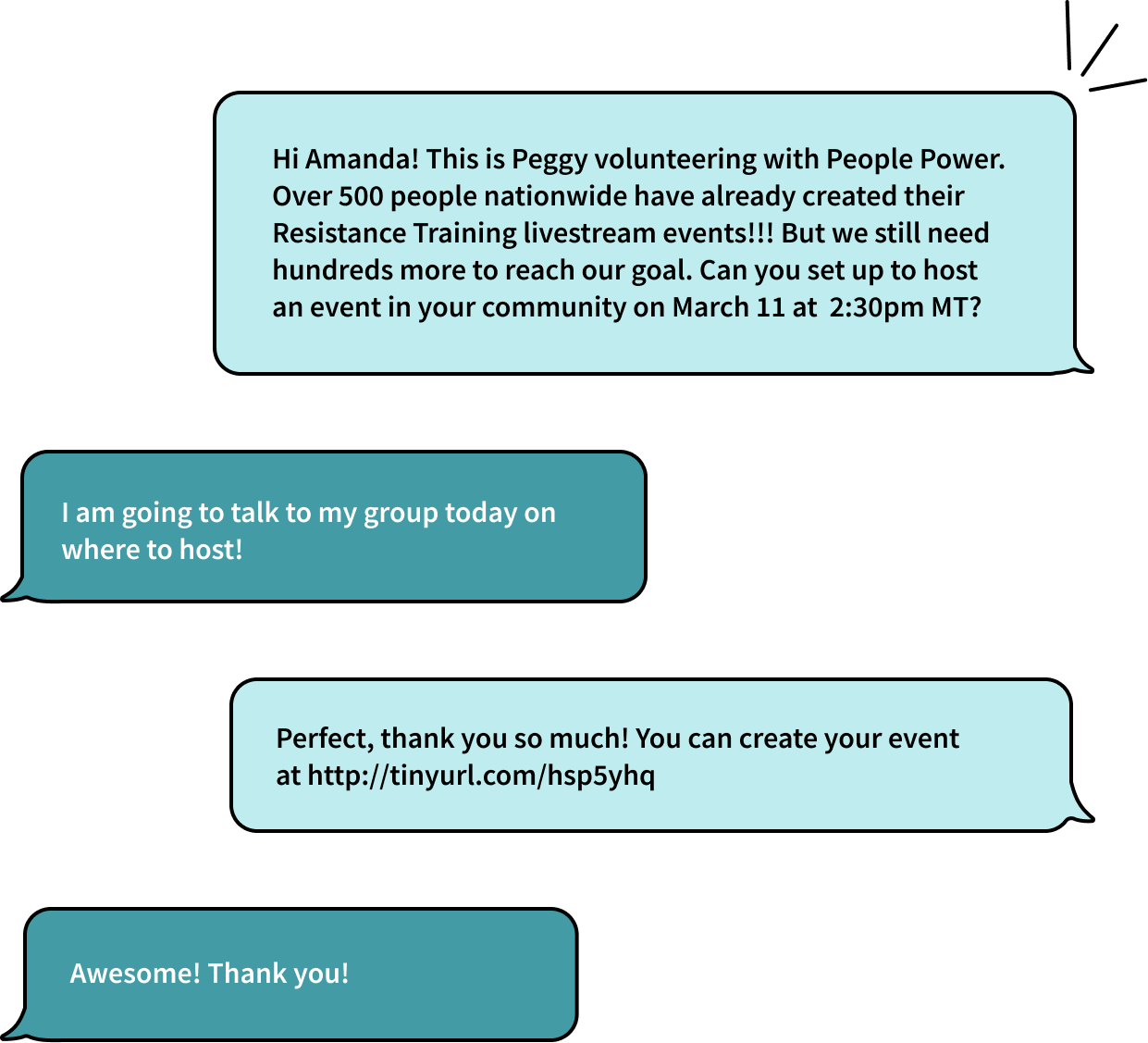 As the People Power program has grown, it has continued to rely on ThruText, using P2P texting to turn out crowds for campaigns like Freedom Cities, which works to enact local policies that protect immigrants from aggressive deportation efforts, and Let People Vote, which aims to restore and strengthen voting rights.


ThruText has also worked with ACLU on adaptations that maximize the impact of its texting program. For example, the team noticed that text recipients would reply “yes” to an event invite, but fall off when it was time to sign up on the RSVP page. So GetThru customized an integration with ACLU’s primary CRM, ActionKit. Now, when a text recipient replies “yes” to an event invite, they’re automatically RSVP’d for the event and receive a confirmation email, which increases the odds that they’ll actually attend.

One of the advantages of using P2P texting, according to People Power organizer Nicole Fairall, is that it taps into volunteers who might otherwise not be able to participate -- people who have disabilities, lack transportation, or live in rural areas can use the ThruText platform to send texts from home. Another advantage is the ability to provide detailed support to volunteers and activists.

When ACLU members in Texas were headed to an immigration rally and couldn’t find the event site, an organizer thousands of miles away was able to look at satellite images and use ThruText to direct them all to the right place. “It’s a powerful tool all around. You get the personal connection and response rate of phone calls with the efficiency of email,” Fairall explains.