We’re so excited today to share that we’re officially launching NewTalk Beta—the next iteration of ThruTalk, our lightning fast calling tool. NewTalk is the outgrowth of hundreds of meetings, thousands of lines of code, a swimming pools’ worth of coffee and/or tea (depending on the GetThru team member), and a whole lotta love for the clients who will put it to use! Here’s what you can expect from our efforts so far.

What Does “Beta” Mean?

Beta means that NewTalk has successfully “graduated” from its earlier Alpha phase, where it was tested for several months by our team alongside some thorough and generous clients (thank you Alpha testers!). Moving from Alpha to Beta means the core dialing functions have been tested at scale, and the tool has sufficient features to run a highly effective calling program.

Beta also means that, while we are ready to launch this to a larger audience, there are a few more key features we want to complete before we consider this a full-fledged v 2.0 of ThruTalk. For this reason, we’re offering NewTalk Beta at an introductory rate of 3.5 cents per dial. We talk more about pricing later on, but for now here’s a peek at what you’ll find in NewTalk Beta.

"Our volunteers have absolutely loved the new layout and on the day we switched from Legacy to New we nearly quadrupled our contact rate" - Sam Sobolov, Pallone for New Jersey

What’s New in the NewTalk Beta?

The short answer is everything. But here’s some specifics:

Along with all that’s new, there’s one unique behind-the-scenes feature we are bringing over from Legacy Talk that we want to highlight:

“The platform is easy to use and the support has been excellent!!” Jay Williams, Director, Clean Up Oklahoma

What Can I Expect Later On?

There’s a few things we’re still working on for this cycle, and we want to be transparent about what you can expect to see a little further down the road this year. This includes:

We’re working tirelessly to roll out a full feature set for NewTalk and will keep you updated as we introduce more features into the tool. But if you take one thing from this entire blog post, it should be this: NewTalk Beta isn’t just a better calling tool than legacy ThruTalk, it’s a great calling tool, full stop.

"I found so much success with the new version of ThruTalk that I immediately shared it with three other candidates!" - Democratic Candidate for State Rep, Michigan

Great. How Do I Get Started?

I know, it’s exciting right? We’d love to get your campaign or organization up and running on NewTalk Beta today. There’s just one more thing we need to tell you: NewTalk Beta costs less than legacy ThruTalk. As long as you’re okay with keeping some extra money in your budget since we’re charging an introductory rate of 3.5 cents per dial (which will become 4.5 cents per dial September 1 and remain at that rate after), we’d love to help you get started today.

We try not to be too precious about our work, and building this new dialer is partly just a software company making our software better. But it’s also about our deep connection to the progressive movement and our role in it. We are proud of the value Legacy ThruTalk has provided since 2018. But we built NewTalk because we believed our clients and the movement deserved something better. We know we can’t fix everything in this broken world. But we can deliver products that make it easier for the “fixers” among us to work better, faster, and more efficiently. We hope this helps you do that. Happy calling. 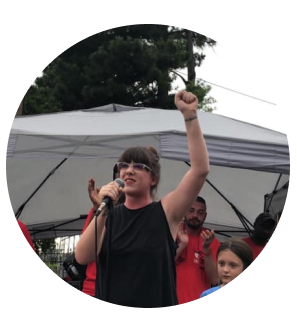 Cat joined the GetThru Team to merge her professional background in advertising and brand strategy with her personal passion of organizing for progressive causes and candidates. Cat is based in Memphis, TN, and when she isn't organizing around local and state issues, she's raising one pretty exceptional daughter, cooking, painting, and petting all the dogs.