Movimiento Cosecha a is a small organization led entirely by volunteers who are spread across the country. Yet it’s been behind some of the most significant resistance efforts since President Trump took office, including sit-ins, student walkouts, and the nationwide “Day Without Immigrants” strike.

In the face of escalating attacks on immigrant communities, Cosecha has assembled a diverse, decentralized, and powerful network of organizers and activists fighting back in 20 states. ThruText has played a major role in Cosecha’s rapid expansion.

ThruText is an incredibly useful tool, especially for reaching communities of color and immigrants. Folks who are directly affected by the Trump administration’s policies can be harder to reach. This is how you do it. We’re proving that it’s working

Cosecha first experimented with peer-to-peer texting (P2P) in February 2017, following Trump’s inauguration. They wanted to reach new people and recruit them to come to Boston for a three-day migrant resistance training, but they were having a difficult time getting responses via email.

So they decided to try ThruText. Their texts garnered a 23 percent response rate, and ultimately they surpassed their original goal for participation. The event drew more than 350 people, and helped launch the “Day Without Immigrants” protest in May.

P2P texting helped Cosecha clear one of its biggest hurdles: Early on, organizers found that it was tough to get immigrants to sign up for email lists, which made it difficult to turn people out for events, and nearly impossible to build the kind of authentic, community-led movement they sought.
‍
“In the beginning, the majority of our email list ended up being movement allies,” explains Thaís Marques, a Cosecha organizer. “Since we’ve made the switch to texting, the people on our list are primarily those who are directly affected by immigration policy. We don’t even ask for email addresses anymore. We just ask for phone numbers.” Most of the organization’s volunteer texting force is bilingual, and texts are sent in both English and Spanish.

Cosecha has used ThruText to recruit and mobilize supporters through a consistent formula: They start with an ad or a video on a social media platform like Facebook. After seeing the ad, viewers are given a chance to opt in by sending a text to the organization. Cosecha volunteers then quickly respond via ThruText with information about upcoming events and actions.

“Without ThruText we would have been stuck with standard digital tactics like email,” Marques explains. “We wouldn’t be seeing undocumented folks taking these risks and showing up.” 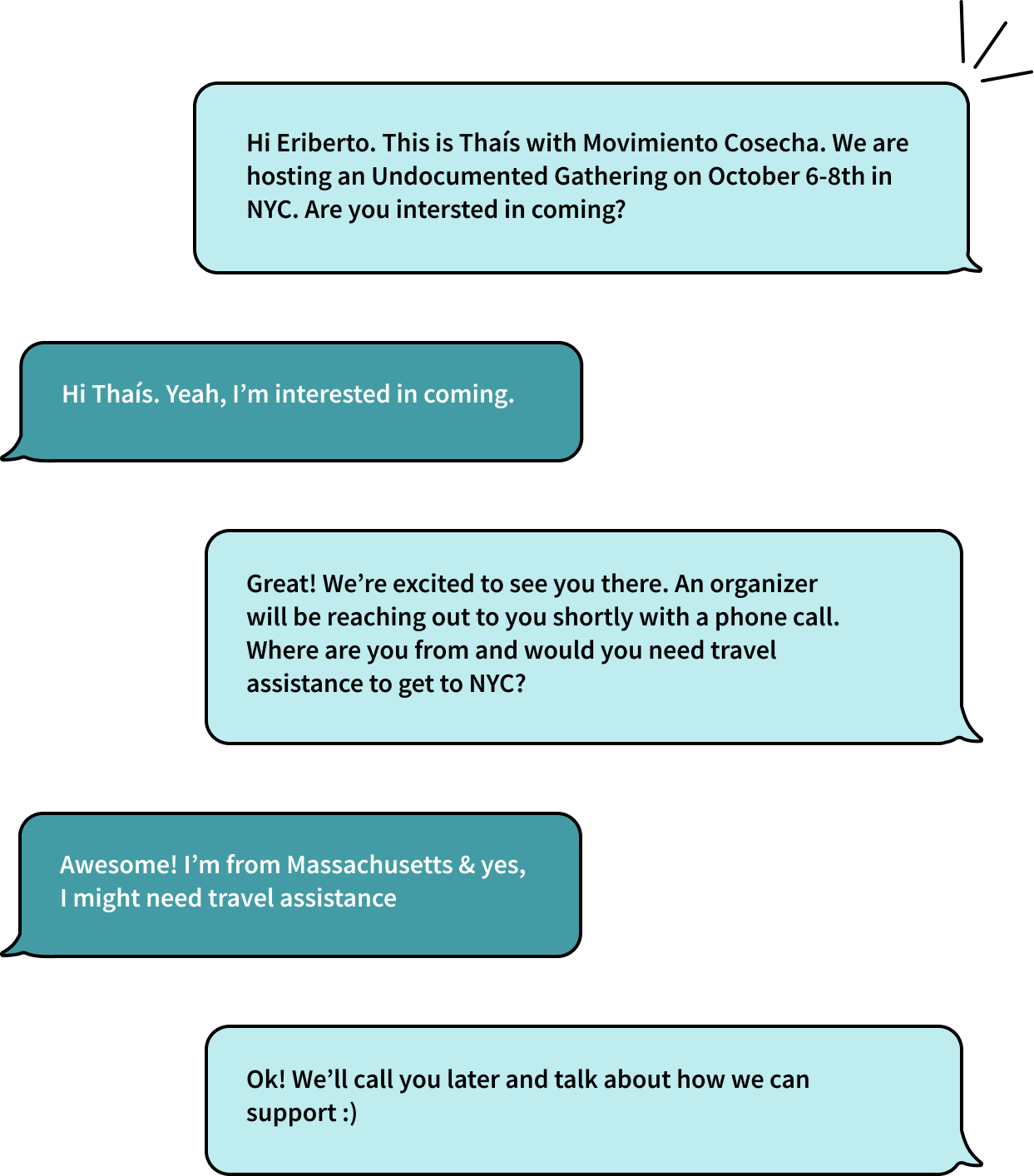