The digital fundraising team at the number one public university in the world found that donors who receive text messages as part of pledge follow-up fulfill at twice the rate of those who haven’t been texted.

The campus that’s known for the Free Speech Movement, the discovery of 16 periodic table elements, and notable alumni such as Joan Didion, Steve Wozniak, and Marshawn Lynch was an early adopter of peer-to-peer texting for education.
‍
Ryan Lawrence, Associate Director of Digital Philanthropy at UC Berkeley, began using ThruText in response to a fundraising environment that’s more challenging than ever: lower participation rates and lower response rates to phonathon, direct mail, and email solicitations. To help meet his team’s goals, Ryan added peer-to-peer texting with ThruText to his toolbox.

Since almost every text is read, we know that we can pass along information that otherwise could be ignored in email, direct mail, or a missed phone call. It also helps elevate other channels and with the texting we’ve done with students, we’re engaging with them in a new way that they respond to very well.

On the university’s day of giving, Big Give, call center student workers texted previous donors to undergraduate scholarships, the College of Chemistry, and the Cal Fund, as well as current-student athletes. Additionally, Ryan worked with the Parents Team to recruit current parent volunteers to make peer asks, training 8 parent volunteers on the spot. More than $170,000 of the day’s donations came from those who received a text. 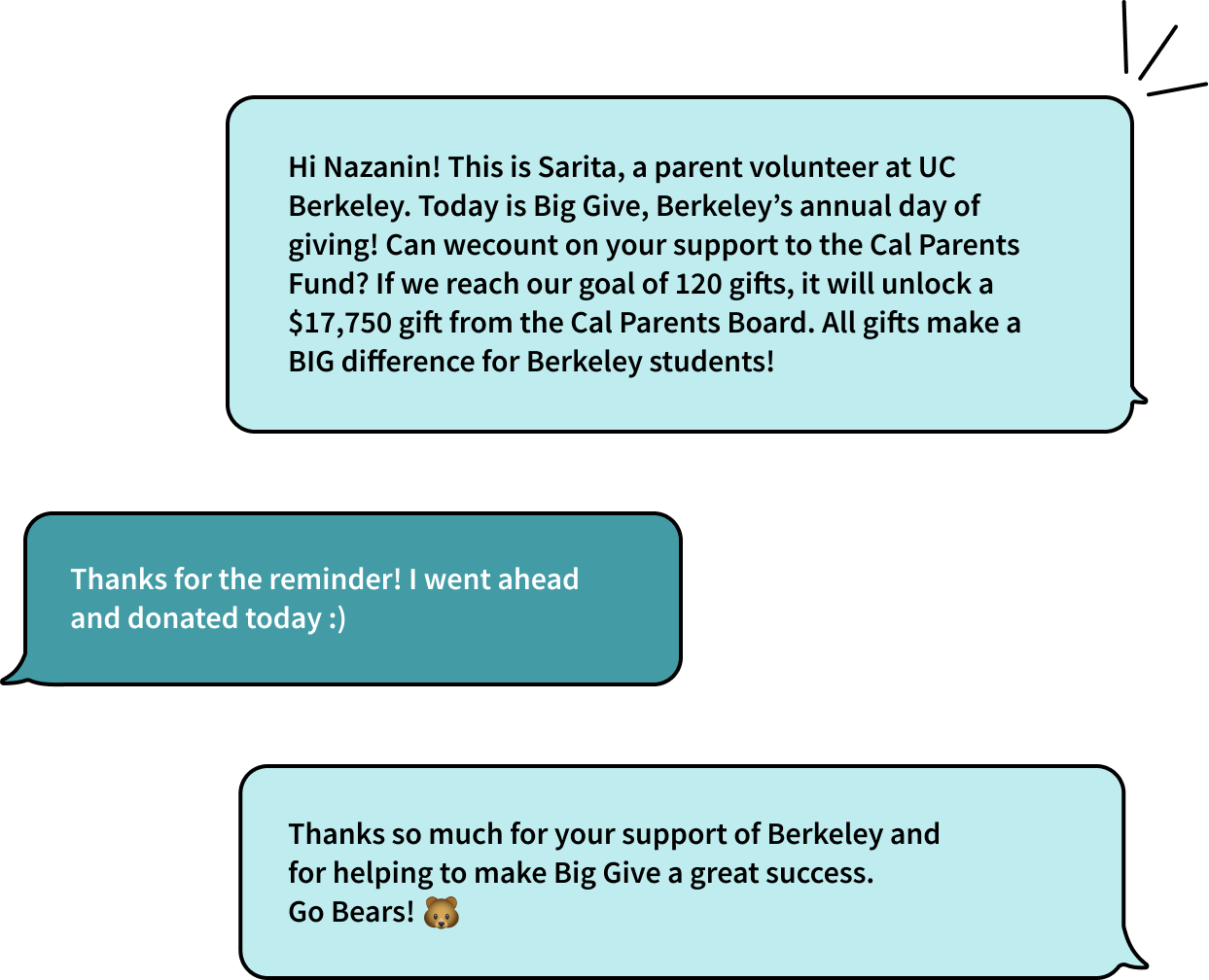 This fall, Ryan’s team is texting select alumni in reunion years to boost event participation, solicit donations, and engage alumni during the critical year-end giving cycle.
‍
Ryan’s team also texts for phonathon pledge reminders; alumni that receive texts fulfill at twice the rate of those who haven’t been texted. They’ve also tested texting direct mail recipients, letting them know to look out for a mail solicitation. They’ve found that text recipients responded to the direct mail piece at a higher rate than those who did not receive the text.

"Texting felt a bit overwhelming at first, but it was actually super easy to train our team and get rolling," Lawrence says. "While there was some hesitation about how our alumni, parents, and students would respond, we’ve found that they really welcome the text messages!”